Since 1995 Internet Explorer has been an ever present and was the dominant force until 2008, this is when Firefox started to command the biggest market share. Has Microsoft done enough to compete? Can it ever regain it’s position as ‘original and best’? or is it slipping into oblivion? Lets have a look through the history, any advances and definitely some negative points that has IE creaking somewhat in todays market place.

Microsoft releases Internet Explorer 10 for Windows 7 (Nov 2012) and 8 (Feb 2013), available in 95 languages. So what’s new? IE10 supports both, desktop browser and touch screen mobile devices. Is it something that we should be excited about or is it just another attempt by Microsoft to re-establish a foothold in the marketplace? Let’s have a quick look… 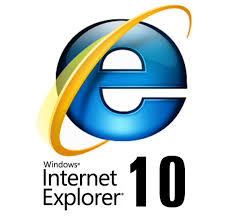 For many users using IE as a default browser ceased a long time ago due to competition from more advanced, stable browsers such as Firefox, Safari and Google Chrome. Being a Mac user I only use Microsoft products through OSX Bootcamp which allows me to boot either to OSX or Windows should I need to or when in another ‘Mac free’ office. I have always found IE to be glitchy, however, in saying that IE has definitely gotten better albeit still lacking some necessary, modern attributes.

My research regarding IE10 started with the users reviews, which were particularly negative and discouraging. It was difficult to find any positives in a single review, I was looking for something along the lines of ‘IE10 is a must’ or ‘Stable, modern and sexy browser’! ….but, and there is a big BUT I found nothing – shocking really!

After reading those articles and not one to be swayed, I installed IE10 on Windows 7 to provide what I feel is an objective article.

Now any new piece of PC hardware you buy will come with Windows 8 installed and IE10 as the installed as default browser, this supports both desktop & touchscreen units. The preview version of IE10 for Windows 7 has limited support and neglects touch screen devices, the overall design is a little different also.

The overall security system has improved, Microsoft says – You will experience many authorisation questions regarding ‘untrusted’ websites, which may contain potential viruses. This is called the ‘Enhanced Protect Mode’, which blocks some of the major areas of the operating system, thus proving far more difficult for both viruses or hackers to gain access.

Ok, but what does it have to do with web development?

Well… IE10 now supports websites, which are developed using the modern standard CSS3 &HTML5 coding structure; also JavaScript performance is 4 times faster than before. For years developers have had to write IE specific code so their beautiful website looks as it does on all other browsers, this I hope will help lessen the additional work for IE only.

Microsoft also claims that using IE10 will optimise your website load speed to anything up to 20% faster. Further claims include saving battery life and help you become more energy efficient as it uses less power than any other browser.

So, after trying for myself I feel IE10 does offer more than previous versions, but when comparing IE10 to its competitors, it offers nothing, which other browsers don’t already offer. This version (IE10) doesn’t seem to do enough to close the gap, never mind leap ahead of the competition in a world of ever evolving and advancing technology.

Having read the article, does it make you want to use or at least try IE10? Is it as good or any better than the ‘other’ browser you already run?

Why not give it a whirl, if you like you like and, well if you don’t stick to what you have…

As a graphic designer and web developer, speed of access and stability in browsers are key to both a productive and stress free working day. I can’t afford a poor quality browser, can you?